The Marine Elves in the Sing’jar channel traded and fished for generations as a determined and resilient community after tragedy struck their ancestors. Hundreds of years ago, on the eve of the destruction of Faroth, forest elves in the foothills east of Sing’jar were forced from their homes by wildfires set by the fire giant trespassed on his way through their hills en route to attacking the island of Faroth. Minotars, long established in the Sing’jar channel as reclusive deep sea longliners of the the Hosh’uu islands, sailed out to rescue the displaced elves. 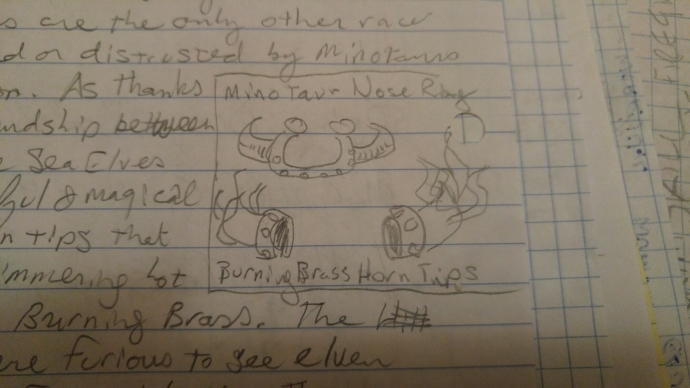 The Hosh’uu minotaurs took the elves under their tutelage as fisher folk in return for being students of wood working. Minotar culture, for all the sailing they did, was uncomfortably dependent on human carpenters to keep them afloat. Our former forest dwellers gladly taught the minotaurs their skills with forestry and carpentry. As the elves took to the sea, they became one of the few races to truly not be dismissed or distrusted by the channel minotaurs.

As thanks to the minotaurs and to celebrate the new friendship between their races, the first new generation of sea elves crafted masterwork magical nose-rings and horn-tips for the Hosh’uu: brilliant hammered brass and polished nickel, known as Burning Brass. When angry, the Burning Brass ornaments appear shimmering hot.

When the Hosh’uu arrived at Darthil and greater Faroth islands, the Forge Dwarves were furious to see such fine metallurgy done by anyone not themselves. The Minotaurs, never intimidated by dwarves, openly laughed! “Ha! You are so obsessed with your weapons, you have forgotten all art, dwarves!”

And yet no dwarven art has appeared on Faroth since it was sacked.