Some notes on making rain barrels. First: I decided that the most likely way for a self-installed bib to fail would be to drill and install it myself. The barrels I got lacked lids, so I couldn’t reach into them to hold a backing nut in place. Bellingham doesn’t have a place that stocks bung caps, so I ordered them on line. I got the brass fittings at hardware sales. I decided to go with a ball valve. Simple, quick to get maximum flow. 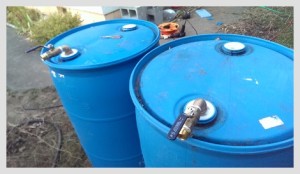 So the top of the barrels are now the rounded bottoms. I drilled a four-inch hole in there, pretty close to the middle. This is because the elbows on the downspout go out to about six-inches.

The overflows are a pair of 1.5″ holes with 1.5in-1.25in threaded iron transitions. I used a linoleum knife to carve the holes wider. Do not use a spade bit, use a 1″ hole saw.

The barrels are white now because I primed them. I’ll paint them soon. I wanted to put some screen into the inlet to try and keep leaf and moss garbage out of it. I’m also going to screen off the overflows, but I suspect that normal window screen is not going to keep mosquitoes out.

There is not a good way to put screen inside the four inch downspout transition, so I decided to cut the bottom out of some small deli tubs which happened to be about 4 inches wide. there is a pretty tight fit between the transition and these ad hoc screen brackets. The trick to getting the screen to fit in is to cut triangular gaps out of the sides of the screen squares. 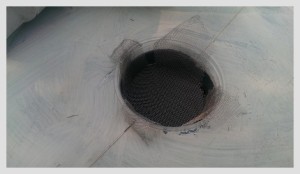