This was a good tip from Chris,  to use a threadless stem to hold bags and lights. 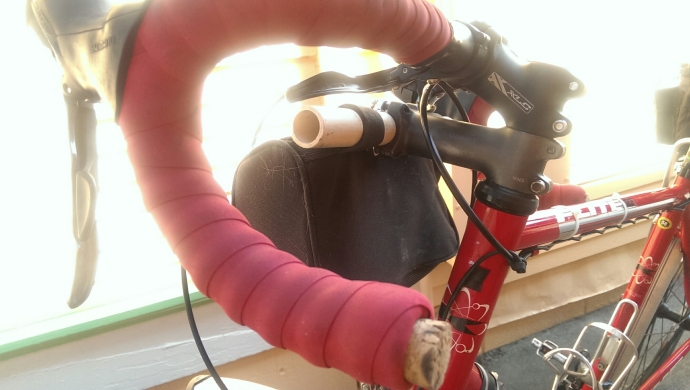 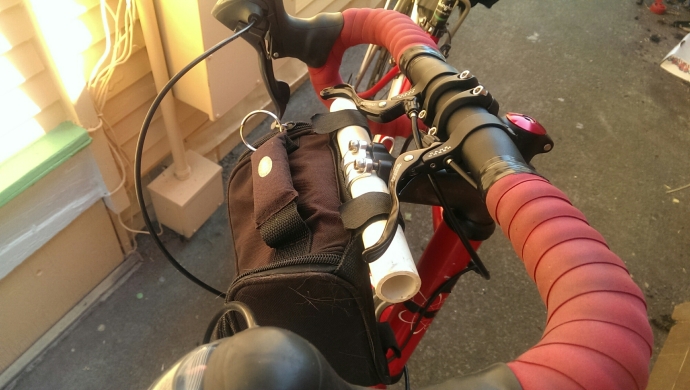 He departed at 5:00, knowing it would take about one hour and five minutes to get home. His wife has to leave for a meeting at  at 6:15. Pulling on his gloves while he waits for the light at Second and Main to change, his leg is raised on the pedal, about to thrust down. The wind is cut the blaring horn of a silver Suburban screeching to a halt, barely avoiding the black truck making a blazing left thru the green, just as if it were daylight, but clouds are gobbling the evening sun and wind is blowing sparing drops of rain nearly horizontal. One glove on, he launches as opposing passes through the intersection. Over the bridge. Signal right, The wind is loud, as loud as the tires of the trucks passing him on the inky wet asphalt on his left.

Left turn. Approaching the construction site, he pulls over and stops. Its dark enough his spoke lights would be a good idea. Rolls to a stop and leans over the handlebars. Walks the bike forward, reaches down between the spokes and clicks on a light. Walks forward another two paces, and clicks on the second light. Leg up, launch.

But now the tires are grinding. Is something caught in the front fender? Trying not to stop again, he swings his foot forward and whacks at the fender with his toe while he coasts. Is that it? Wham!

He picks himself up off the asphalt, his left elbow is radiating tingles of pain and his left palm is throbbing. Picks bike up. Headlights…brighen, and pass. Wow, that was only about five seconds behind him. Fron t wheel very stiff. He picks up the front end of the bike and rolls it on one wheel to the completely unlit sidewalk. Grateful he packs some tools, he digs out his bike bag from under the bike tarp, and fishes out his hex wrenches. The top fender bolt twists…but the nut on the backside twists. He doesn’t have a wrench. He must be late now. Call wife? Dig out more phone, take off helmet, hope for signal?

Yes, brakes. Picking up the front of the bike he rolls the front wheel with his foot and see that the tire wobbles about half an inch. Damn, that will take time to fix later. Better just losen the brake cable now. Next hex wrench. Nope, not that one…yes, that one. Loose. Damned brakes are pulling on one side…no screwdriver. Damn…uh…swiss army knife blade. Loosen some brake tension screws.

Pack the bike bag in the back of the bike. Adjust the twisted 250 lumen lights. Helmet light still on. Clip in, raise leg..launch.

Damned brake is still dragging. Have to put it off until I get across the overpass becuase we don’t need the brakes going uphill. Wishes he packed a pair of pliers and a screwdriver…isn’t that what a Leatherman is for…? Maybe. His legs are feeling strong, even in the 12 mph wind. Low gear, shine your helmet light at the cars waiting at the left and right in the dark to encourge them to see you.

Across the overpass he stops in the first driveway. No screwdriver. Late. Does not want to dig out bike bag again. Has nail file edition of swiss army knife on keychain dangling from seat rail. That has scissors! Does not want to completely ruin his left front brake pad. Swiss army scisors are wide enough to adjust the left brake pad tension screw…but barely. Yank on them…they lean. Tighten some more. Cars pass in the background. Rain drops zip through the invisible cones of light shone from his front forks. His helmet light is very weak in comparison. Even?

Even enough. Clips the keychain to the brake cable on the handlebar. Glad he doesn’t feel weak from lack of food, it was smart to have eaten a 32g carb granola bar almost an hour ago. Clips in, raises leg. Launch. Hopefully, not too late.