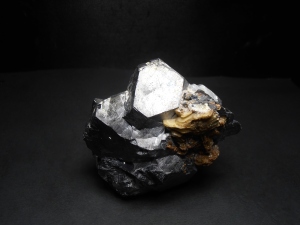 East of Faroth is Sing’jar, burned for not the first and not the last time. Further east into the Sing’jar mountains are the elves and their small cities. Roll down the eastern slopes thru the plains into the deserts beyond the mountains and you encounter a the current host of orcs living in a deep and broken gravel pit known as Galentaspar.

Over a thousand years before Thromcron the stone giant shepherded dwarves to the Faroth islands, Funtur Ludroth, dwarven prospector climbed out of a crack he had ducked down into an hour before and thrust a nugget of gray ore at his wife, crying “Lead!” In a decade, his children were helping a hundred more dwarves mine the depths of ore beneath the desert, collecting minderals rich in lead, tin, vanadium, zinc and chromium. These elements are exactly what makes copper into brass or bronze, and iron into steel. And the gems.

Funtur and his family build the Great Hall Ludhold. Its cool depths became a bazaar for metal trade, armor and weapons, and powerfully magic gems. The crest of Ludhold: a hammer before a half sun with four rays, and a moon with three stars reminds the citizens of the battles they fought to keep the hall. Three stars for three heros that killed four giants that would have taken the mine before it was a great hall:

Sidian Galentaspar, Lithum Stontun, and Stal Cavepool, cousins and nephews of Funtur, fought two hill giants: Kaa Toprock and Fut Fastfall, then defeated two stone giants: Ung Granitefist and Lanche Slopesweeper. The dwarves tactic was to lead the giants to large cliffs where they had weakened the rock faces and turned their cleverness against the giants using avalanches.

Ludhold was routed within 450 years by an adult red dragon and a fire giant. The red dragon stole the precious stones and gems, and the giant stole the steel weapons. The giant battled his way west but was eventually rebuffed by the Sing’jar elves. Galentaspar was occupied by orcs is was used as a gravel pit and sold its few remaining boulders to the remaining hill giants.

Stal Cavepool, nephew of Funtur Ludroth, having fled the destruction by traveling west, paused his dwarves for a few years in tunnels below the Sing’jar mountains. His son, Lowdug Ironrung heard of gnomes selling iron craft across the sea to the west. Redfist Tallbeard, also hearing of the opportunity, rushed to the west side of the Sing’jar mountians before Lowdug to capitalize on it. While Redfist was getting rich trading with the Sing’jar valley humans, buying and smelting ore from the Faroth islands, Lowdug encountered the last stone giant of the mountains–Thromcron.

The hill giants aligned with the fire giant Crimskill to drive out the last stone giant in the mountains: Thromcron. Crimskill had allied with the red dragon Rodorax, who’s home is in the Skaldston caldera east of the Galentaspar gravel pits.

In ancient times before Rodorax, the Skaldston caldera was probably peacefull rolling hills, until it became the scene of a monumental battle between two dieties that rent the land and boiled the chasms with magma. Probably in a cave of rent rock, mere feet above the boiling stone, Rodorax naps on his horde of gems.

Thromcron and Lowdug recognized each other as outcasts or refugees in their own ways, and decided fighting each other was completely vain. Rather, they decided to travel to Faroth and foster the true value of the deposits on the island and make a new life, away from Crimskill, his gang of hill giants…and Rodorax. On their way through the western Sing’jar hills, Thromcron stirred a rockfall over Tallbeard’s cave entrance and destroyed his smelter. Arriving at Faroth, Thromcron built a giant’s hall and the dwarves aligned with the gnomes to create new metal wonders.

Rodorax, with the remaining Ruklaf crystals, gathered elemental troops to attack the brass dragons in the far eastern desert. Having captured their hordes, he returned to find Crimskill had also been using his own Ruklaf charms to summon his own troops. Rodorax, a proud and commanding dragon, could summon devils and neutral elementals. Crimskill, being completely unscrupulous and of uneven character, could only summon demons and other power-hungry scavengers that were always tempted to raid the dragon’s lair.

Much of what Crimskill summoned was destroyed by Rodorax, who ejected him from the vicinity of the lair. With some effort, Crimskill drew the remaining drek he could command to attack Faroth, in hopes he could finally win his last true Jotun victory against Thromcron.

Destruction and turmoil burned a path west over the mountains. The high elves, once plentiful,, mostly obliterated the demonic minions in the mountains, but themselves were mostly lost in the process. Tallbeard saved many elves, and with his scan reserves of Ruklaf, banished much of the demon army. Many of the forest elves of the Sing’jar mountains fled this battle as their small groves were routed and burned. They fled into the sea on what boats they could buy or build, and were adopted by the minotaurs in the Sing’jar-Faroth channel.

Crimskill, after destroying Thromcron, traveled south to find a mate and brought her back to Skaldston caldera. He declared himself King Crimskill and lived another hundred years while having a son, Januflax. Januflax is now king, surrounded by generations of murderous fanatics, seeking the lost gems of Ludhold and many possessed by the blood rubies of his father, Crimskill — a curse bestowed on him by Rodorax.

Januflex wields Crimskill’s prized possesion: the Giantskull Scepter, a magical scepter with a 2000GP Ruklaf gem in the crown of the first stone giant he killed. With this, he can banish any demon in sight once a day.