Apply your modprobe.d values without rebooting:

This was a … memory error … caused by overclocking?

Here’s a fun trick to list the serial numbers and sizes of your hard drives:

In August, I did a post on a pretty simple bash cpu meter. This one is still Intel-only, but is records the range of frequencies used during a report.

Here’s part 2 of my saga about dealing with data corruption on my Linux machine: turning on synchronous mount options.

Here I start a series of posts talking about my home workstation getting file system corruption.

Here’s a tedious task for you to consider. When you log-in to your favorite website these days, you’re creating a JSON document and posting it to the service you’re logging into. Long gone are the days when you just posted simple form parameters from a whole post. I work on an emulation platform: one of our features is to use Perl to emulate hundreds of users logging into a captive portal. This requires an economy of memory and time: creating hundreds of “firefox -p ~/.cache/firefox/xzf30d.userprofile” profile sessions is clearly not:

So we use Perl. This requires reading through the F12 -> Networking tab of your browser’s debugging window and emulating the AJAX post to login. Fun once. Wouldn’t want to live there. 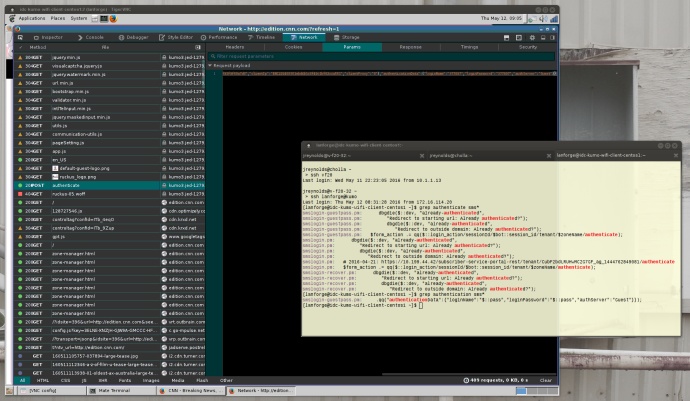 There’s a decision to make when you want to write your scripts when it’s time to back things up: use tar or rsync?

You probably don’t need to backup your whole hard drive every day. Just back up what you changed recently.

The other night I ran thru what might be the gamut of video editors because kdenlive was crashing on me. I’m going to run down this list.

Openshot: am finding it doesn’t import clips and align tracks to base audio comfortably. Did not like having to right-click-properties for fade-in, fade-out this and thats.

Pitivi: gave up on almost two years ago. Was not stable, was not useful for aligning base audio and video clips.

Blender: that looks like a lot to wade thru…to much so to just learn about the NLE features I’d use. Would love to…someday.

Avidemux: I guess it’s OK for processing clips or stitching a few together, but what I was interested in was it’s ability to batch-straighten & noise-remove (visual noise) video clips before importing them. This required I spend about a day digging into why their example java script on wiki did not work and had to abandon. Useful if you have one-three clips a day, but I can’t justify that much time to convert 20 clips once a year. Did not get any clips converted. I’m not a shy programmer, just skeptical.

Cinelerra: Oh my. Was this thing created in Borland Turbo Pascal in 1997? It does not support clip alignment except by typing in time offsets. That took two hours to determine…and I gave up.

Lightworks: complained about not having Nvidia hardware. Gave up.

Flowblade: they polished this nicely. Really tried to align some video clips to audio but to move things and add spacers was just so unintuitive I had to abandon ship.

Vivia: not in repo, looks abandoned.

Kdenlive: went back to old trick of doing a FULL KDE install on 15.10 and created a new kde user. Finally stopped crashing when I made sure to chown -R kde:kde /home/video. Still wasn’t perfectly stable. Very disappointed that lack of error messages. KDE software loves to spam the terminal console you start it from, so things like “cannot move clip” or “cannot find clip to move” … no root causes. Eventually produced video with 15 clips, one base audio track, and 45 stills.

Kdenlive is probably the easiest to use NLE for Linux I’ve found.