Before the orcs ruled the gravel pit Galentaspar, it was a thriving Dwarven kingdom: Ludhold. Prized magical lead minserals such as galena and dioptase were prized from the depths of the ridge where Ludhold stood. Crimskill, a brutal minded fire giant, crushed Ludhold with the help of the red dragon Rodorax. He chased the remaining dwarves to the eastern edge of the Sing’jar mountains where he was pleased to find them fighting not only with the elves, but among themselves. He crested the peaks, the natives scurrying before him and saw the sea–and smelled a stone giant. Saw the influence all about him–the large stones no elves would bother moving to make such battlements atop this ridge. Infuriated, he marched across the straight of Sing’jar to Faroth and battled Thromcom, crushing him with his burning hands, leaving his rocky bits scattered in the sea…and the whole island on fire.

Pleased with himself, he traveled south, seeking new plunder–and a mate. There was word of better giantesses in the south–much better than the dull hill giants that seemed to crowd the Sing’jar hills. Past the minotaurs and past the archepellegio to the sound of Ginc’yo, in which a rocky bay covered with smog sitting below steep cliffs he smelled the scent of other giants.

That whole bay no longer exists, just the twisted earth that shows evidence of a mighty battle that left a mountain sundered into a vast rockfall that completely covered the town under the smog–no stories but this remain:

Vanjollen, bastard brother of the cloud giant Jotthilmien, was cursed by their uncle, storm giant Thragrush, into the form of a small human with ash colored skin. Vanjollen adopted the name Chimswip, and passed his punishment as a chimney sweep, travelling from town to town, telling stories and invitably being forced out for not paying for food or drink. Chimswep climbed the peak above Ginc’yo and lived a hermit and could only be heard singing the songs of giants…and eventually, the songs of Lolth and the Drow.

Sailors of the archepelleio tell stories of the smoggy city that suffered under a vengeful despot who made the townspeople mine coal and harbored spiders and dark skinned warriors that herded the townspeople into their homes at night. Gnomes of Faroth tell tails of Chimswip Steel from the south, a hardened metal that rivaled adamantium and left  your hands black as soot after working it.

Crimskill brought a giantess back from the south that  wielded two black-headed hammers that would not shatter no matter what she hit them upon. On both her shoulders were tattoos of spiders. Her hair was white but her eyebrows were as black as coal, and she wore a necklace of giant’s teeth and earrings of what appeared to be gray human molars.

The ruined Ludhold, now known as Galentaspar, still smoking years later from the piles of coal still burning from the dwarven forges still cooling down, attracted an Orc warloard Rudchok Firefemur. The orcs tell stories of seeing a huge eruption to the south and in the morning the tunnels below Galentaspar were filled with dead orcs–swollen and rotting from spider bites. Every night for a year, the orcs fled to the edge of the gravel pit to avoid the black skinned elves that climbed from the tunnels and guided spiders as orcs guided wargs, and collected orcs for food.

Rudchock, having recovered from a spider bite himself, finally gathered strength abd gold enough to hire sorcerers to protect him and negotiate a settlement with the Drow. Now on the eastern side of Galentaspar rises eight thin stone spires coated with webbing. Every night the webbing is repaired by spiders from the deep and at midnight, the Drow come to gaze at the sky through the webs or trade with the Orcs.

All the mages in the desert seem to have traveled through Galentaspar for meetings with the lead drow: Eclipsen Darkmoon. Eclipsen, as a young and vicious assassin that often left a pile of dead orcs at the end of every trading session used to laugh about how he was forced to learn about metallurgy in the mines, and one day he hit his hot bar so hard the roof of the cave blew away into the sky and he fell through the clouds and landed on crappy lead ore to the north.

Eclipsen, now more serious with age, is credited by the orcs has having brought prosperity, education and discipline to the orcs. A hundred battles were won after the cairns were raised, orcs say. Not even a dragon could attack Galentaspar now, they boast. But the peace in Galentaspar is never easy. The Drow the patrol at night and the half-drow that patrol the day clearly hold no respect for the orcs. The captains of Crimskil and Rodorax the silent foes and are tolerated because they trade in gold and magic items.

A complex arragement of five buroughs surround the crater of Galentaspar: each mercenary that rules their cairn taxes the trade. Only the most clever orcs may get a chance to speak with these kingpins. The kingpins pay tribute to the Rudchock family and to Eclipsen. If you want to get to the magic items for trading, you have to matriculate from a day-side trader to an endorsed night-side trader to descend into the pit.

It is intended to recall all the credible accounts and information of the NSA’s domestic spying program found in the media, congressional testimony, books, and court actions. The timeline also includes documents leaked by the Guardian in June 2013 that confirmed the domestic spying by the NSA. The documents range from a Top Secret Court Order by the secret court overseeing the spying, the Foreign Intelligence Surveillance Court (FISA Court), to a working draft of an NSA Inspector General report detailing the history of the program.

This is the worst news I’ve heard in a long time.

Verizon is Evil, and is trying to take away the Internet.

Verizon’s Plan To Turn the Web Into Pay-Per-View – Slashdot.

I like the phrase “starter crank.” I loved planes as a boy, but now I’m bitter about the symbolism. Is this an attempt to poke at jingoism? I love the tone of the shiny metal, truly. 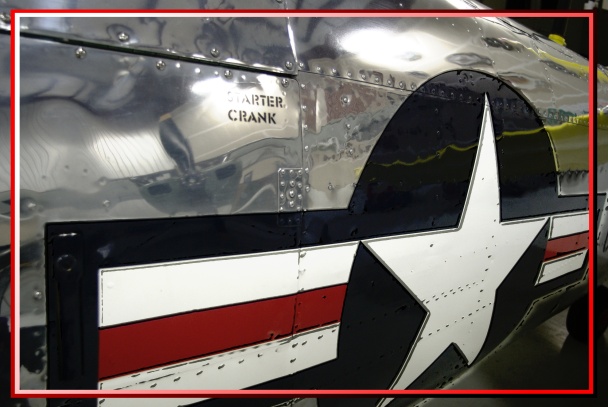 Here’s the Bruce Schneier doll that Modwest donated to the Linuxfest Northwest world famous raffle. What a great prize! Bruce is decked out Matrix style to defeat all your security-thru-obscurity talk and send you packing back to your world of security theater. I wonder what Modwest will donate next year…I know a Leo LaPorte doll would not fly with this crowd ;-) A steampunk Ada doll would rock! 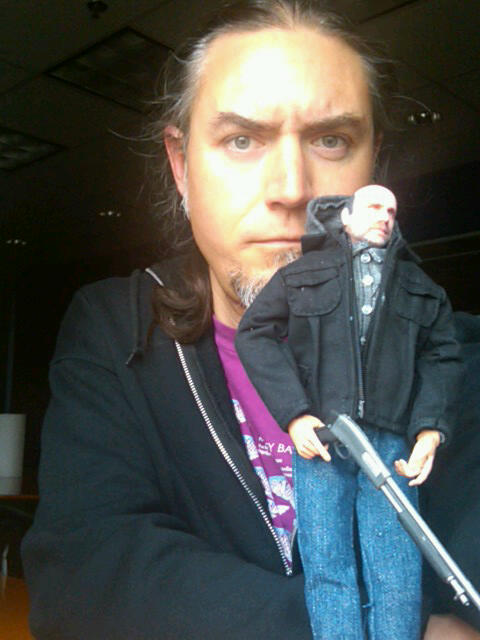 Are there TW people in Bellingham planning a protest ride for this date?

I found this idea sprouting in my cereberal loam and transplant is into yours: Steve Gibson and Leo Laporte have been discussing the topic of the DNT header and congruent proposed privacy legislation. They are worried that the notion of tracking cookies will either be legislated to present manditory EULA agreements before acceptance, or that semi-anonymous tracking information might become legally encumbered. The effect being that advertisering agencies will not have low-friction mechanisms to identify semi-unique visitors. In Leo and Steve’s estimation, it is possible that the ability to calculate unique impressions for ads will become crippled, resulting in the advertising economics that often fund todays online independent broadcasts evaporating.

Two or three points of view occur to me. First: there are no good impression mechanisms for television, radio or newspaper–todays “netcasts” are offer an unprecidented resolution for advertising impressions. Is it possible to go on without it?

Second: the notion of cookies and headers, and privacy on the internet is exhaustively discussed. Our fundmental technical structure was not designed for anonymity, and whenever we create a login, we erode that notion ourselves. Do you think it is possible that we could design a web protocol that preserves anonymity, and is it possible to suppliment it with a perishable anonymous identity created by third (non advertising) parties in order to present a hollow avatar to the Internet? Thus, instead of using OpenID providing by wordpress or yahoo, we could use a token associated with a random identity provider that would last a season, which is often long enough to outlive our relationship with many online serivces.

And thirdly, the market for uniquely identifying visitor impressions in a semi- or mostly- anonymous manner that respects privacy obviously exists. You have looked into this for your own podcast, as you’ve mentioned. The poison pill in the flagon with the dragon is mostly the commercial entities aggregating advertising cookies across (all) Internet domains to the degree that these largely unaccountable companies cannot help but have no degree of anonymity left to their data. I have heard of methods of splitting data among multiple parties such that no two of three holders of the data can fit their pair of bits together to guess the third, and thus there is little hope for one holder of a stripe of bits to interpret identity from it. I presume that some basic changes to web client behavior would have to support this.

Not only is this concept applicable to assigning cookies to browsers, it is also governable, and it is also taxable. Do you think it is possible that multiple public institutions could curate fractional-cookie sets such that advertisers could pay them to compute uniques impressions from a set of cookie-shards?

I don’t assume I’m the first to consider these ideas. What of them are already out there? 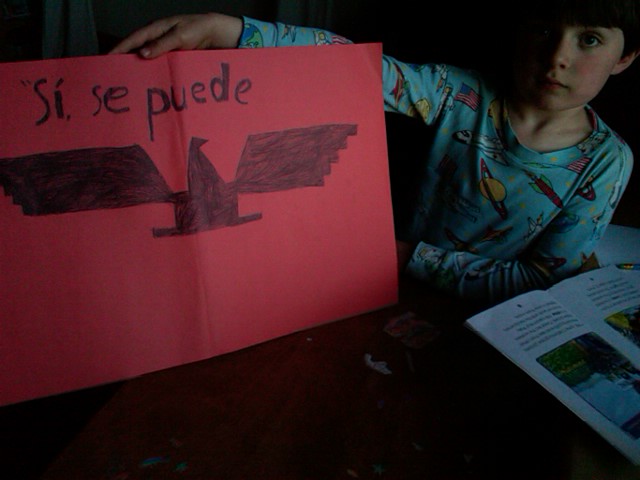 This article by Elly Blue describes a confused world full of sexism, angry drivers and confused cyclists. I often forget about the strong sports and athletic emphasis in the cycling world–mostly because I don’t really pay attention to the sports side of it. Women are still touted as sex objects in the cycling world. Sports seems to cloud the mind, obscuring a greater issue: it is still not safe for women in children to bicycle alongside auto traffic.

It’s hard for people to live without their car if they only feel safe getting around by cars. Do we actually need to drive a car because we assumed everyone was affluent enough to get everywhere by car?  How close is the day when 55% of our income goes into travelling by car? Does that status extend to $10/gallon gasoline?

Will the price of gas out-pace our ability to build separated bike lanes so that citizens can safely cycle without fear of being hit by a 3500lb rain-suit? Are the only cyclists going to be brash, fearless men who would rather chase down cars on their bikes and knock on driver-side windows to tell motorists how they nearly murdered a bicyclist? What does it say of a society that we allow civic infrastructure to remain intractably oligarchical, when a growing number of families can’t afford the gas to use it? Will it force us into vigilante civic infrastructure?

As a father, Elly’s article speaks to me of family life–getting groceries–safely. Civil rights, and the freedom to travel unharmed with your children in public. By walking or biking. I am increasingly convinced that the transportation revolution, like the nutrition revolution, is to be won by women with children voting for safer bicycling infrastructure. We have to pay taxes to get that done. We have to enroll corporations (like grocery stores) into encouraging their customers to get their groceries by walking and bicycling.  This is a domestic freedom. Women need to stand up for their right to not travel by car.